Akashinga Welcomes A Special New Member To The Team

Tracey and Katana meet
for the first time

Our fight against poaching is gaining momentum.

As Akashinga expands, we’re constantly refining existing operations and always looking for methods that will increase our effectiveness. We’ve recently found another way to do both!

We’re proud to tell you about two rangers from IAPF’s Akashinga unit, Tracey and Future, who recently completed K9 training in South Africa. They were not training alone: This brilliant and beautiful Belgian Malinois canine (K9) named Katana is their new patrol partner! Katana has been trained to sniff out ivory and track poachers.

She’s now deployed in Zimbabwe’s Lower Zambezi Valley with Tracey, Future, and their Akashinga unit. Katana is aiding our law enforcement efforts, making it even harder for poachers to evade capture, and her presence serves as a simple but effective deterrent to people considering poaching in the area.

Katana, our newest
member of the team

A dog’s sense of smell is somewhere between 10,000 and 100,000 times more acute than ours. The area of a dog’s brain that analyzes olfactory information is also 40 times larger than that of a human.

The Malinois breed consistently ranks as one of the best tracking dogs with an extremely keen sense of smell. For this reason, they’re very popular with law enforcement operations around the world.

Humans protecting other species is a wonderful thing, and we consider ourselves fortunate to be working with such a smart, agile, intelligent animal who brings an incredible set of skills to the anti-poaching effort. And she’s as dedicated as any other member of the team.

Why Tracey and Future?

Tracey was chosen to take on this responsibility because she’s an exceptionally good runner and is uniquely comfortable around dogs. Future was chosen because her positivity and physical energy mesh well with a high octane, run-all-day, conservation tracking dog!

As you can see from these pictures, Katana, Future, and Tracy are already in sync and working well together. We are so proud of these women. They showed remarkable commitment and focus as they worked through their training course together.

Kudos to Future and Tracey for their ongoing commitment to harmonizing with the animals around them. Poachers beware! 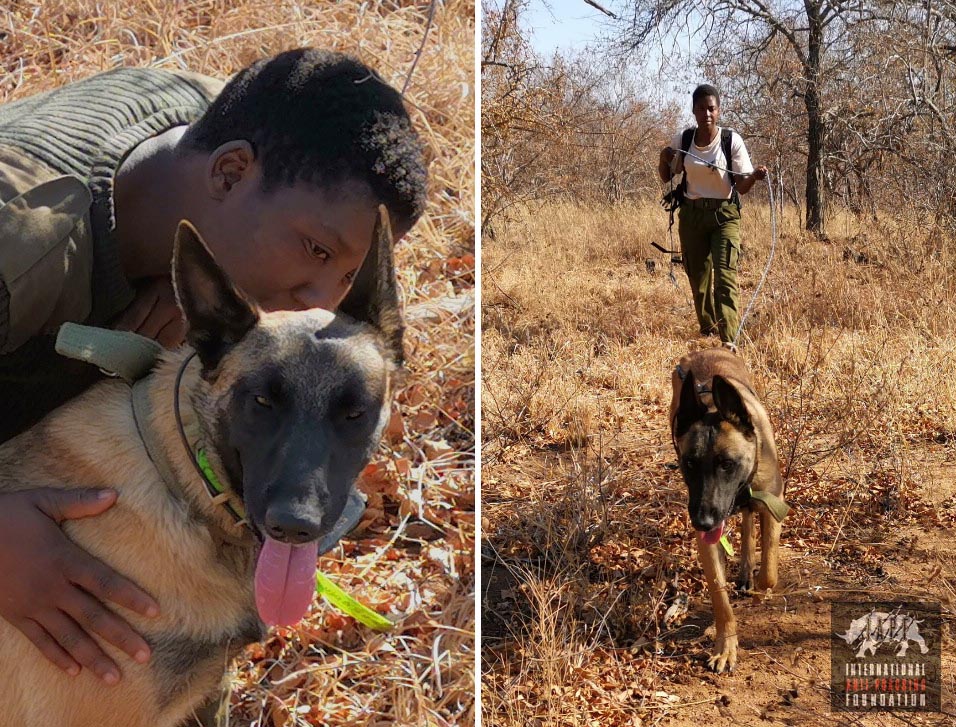 Katana just completed her first operation with Future in the Phundundu wildlife area in Zimbabwe.

The poachers were five hours ahead when our team first picked up the tracks. These poachers were using anti-tracking tactics. In this case, that included walking backwards, kicking up debris, and spreading their tracks out to confuse the human eye.

However, Katana used her nose to pick up their scent and follow their tracks.

At one point, not even minor ground disturbances could be seen, but that makes no difference to Katana. She continued dashing forward straight toward the poachers and caught up with them quickly. The team was only on the trail for about two hours before they were apprehended.

This was Katana’s first operation – but she is already contributing to IAPF and the areas we protect.

Katana’s Life Outside Of Work

Typically, K9s like Katana are trained as if for military deployment. They work in the field, and then when their job is done for the day, they go straight into a kennel. They do nothing else, and their life is monotonous.

Katana works hard, but she’s valued for more than her work and special skills here. She is treated as an individual – as an important part of the IAPF team.

Here is a great moment with Katana when she was on a break. Pictured are Katana and Fico (Fico is another K9 working with our team, who came to us as a retired dog from the military).

Jay, one of our IAPF team members in Zimbabwe, works to rehabilitate the land under our protection. On the day pictured below, Jay was hanging out with the dogs on what he called “a bloody hot day”. 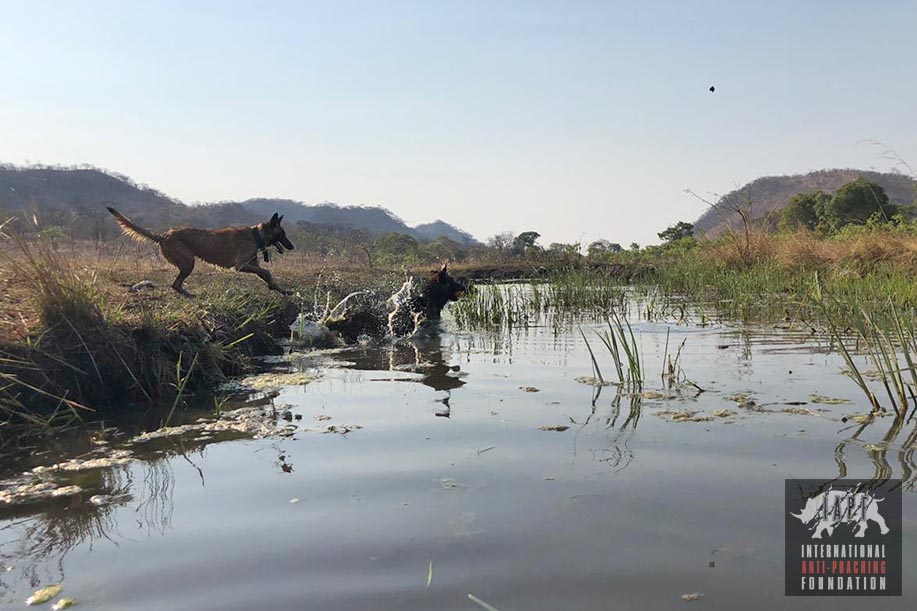 Temperatures in Zimbabwe in November have been hitting the mid 40’s Celsius (113F!). Katana and Fico couldn’t wait to jump in once it was time for their break, with Jay jumping in to join them moments later.

The dogs have a good life here…and just like humans, they are much better at their job when they are happy. 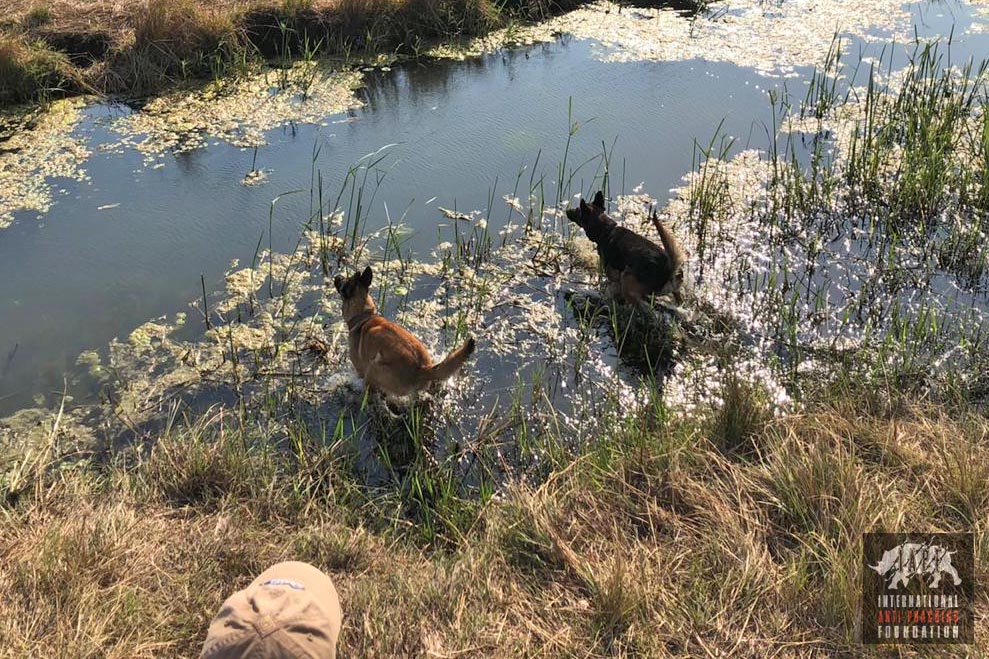 We offer our tremendous thanks to the organization Canines for Africa. Because of them, IAPF’s Akashinga program now has a wonderful and talented conservation dog! We’re also grateful to Conraad for training Tracey, Future, and Katana at K9 Conservation. 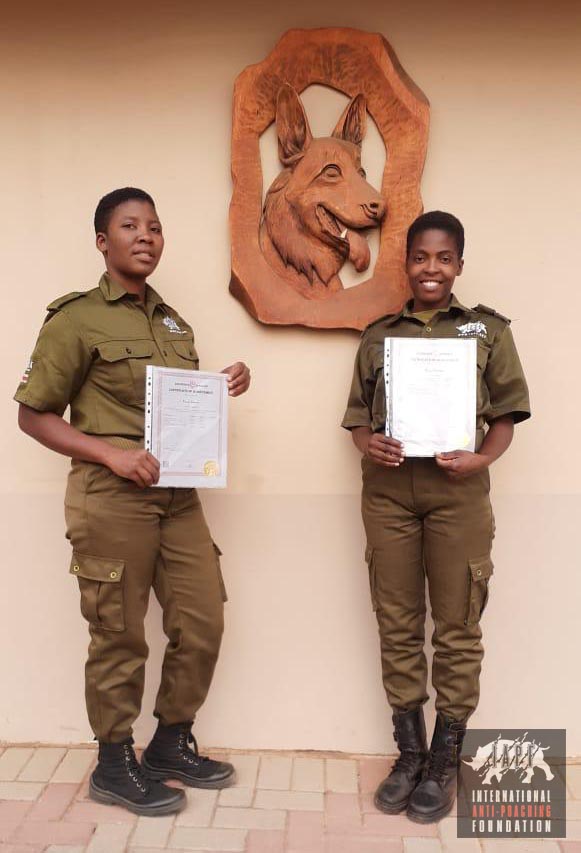 As each day passes, Akashinga is making a larger and more positive impact for wildlife, habitats, and local communities in Africa.

We just wanted you to know.

Thank you for supporting our important work, and please consider a donation today to keep it going!